The evolutionary history of man testifies that we are a diurnal animal species. In fact, during the part of the day illuminated by sunlight, the main activities of research and consumption of food have always been carried out, and coherently with this our physiology has developed. In the night rest phase, biological investment functions predominate, aimed at repairing and regenerating organs and tissues such as those that occur in REM sleep.

Man has disconnected from the environment in which he lives gradually, up to the present day when, in western society, this link has been almost completely lost, together with the legacy of knowledge of traditional culture. This loss of connection with traditions also occurred in the way we feed ourselves: the quality of food (what), their quantity (how much) and the times of consumption of meals (when).

As described in a previous article, there is an optimal window in which to feed and is regulated by a clock placed at the level of the central nervous system (central clock) synchronized with different peripheral clocks (slave clock), present both at the cellular level with gene expressions and organ with various functions. Some peripheral clocks have been identified at the level of the liver, pancreas, intestine, adipose and muscle tissue.

The first studies on the genetic link between circadian rhythms and metabolism concern the mutation of the ClockΔ19 / Δ19 gene on mouse models subjected to day –night rhythm dysregulation. The result of this study showed how this mutation led to the development in animals of arrhythmia, hyperphagia, hyperlipidemia with hepatic steatosis, dysglycemia due to insulin dysregulation (1).

The latest years, more and more scientific evidence has shown that circadian dysregulation of the sleep-wake rhythm and of the meal-fasting cycle lead to metabolic dysfunctions and an increased risk of disease, citing among others the Nurses’ Health Study (https://www.nurseshealthstudy.org/).

The coordination between the central clock and those in the peripheral organs occurs through nervous, endocrine, body temperature signals and behaviors such as the sleep-wake rhythm and meal times.

Thus, it appears that the pancreas also has its own biological clock which influences its secretion of insulin which, under physiological conditions and without food-induced stimulation, reaches a minimum in the hours of the night (2). In the night window, in fact, the presence of other hormones prevails, such as melatonin, GH, glucagon, etc. and immune and reparative processes.

How to predict how much post-prandial insulin remains in the circulation?

The foods’ insulin index (FII) is a recent parameter that indicates the increase in post-prandial insulin secretion compared to individual foods (3). The information provided by this parameter is very promising and integrates with that of the index and glycemic load because the latter are not always correlated with the insulin response. This occurs because in reality we do not eat individual macronutrients but we consume complex meals in which carbohydrates, proteins and fats are present.

Effect of lipids in the meal

Lipids for example, taken individually, do not particularly stimulate the release of insulin, while added to carbohydrates they increase the insulin response by up to 60% (4). It turns out that adding fats to meals also lengthens the insulinemic curve.

Studies done in the past have determined that the length of time insulin remains in the circulation after a mixed meal depends on the type of fat ingested, in particular on the length of their chain and on the number of double bonds present (5).

For non-professionals, the fats are made up of chains of carbon atoms, the number of which is indicated by the first digit, and the presence or absence of double bonds by the number after the colon. 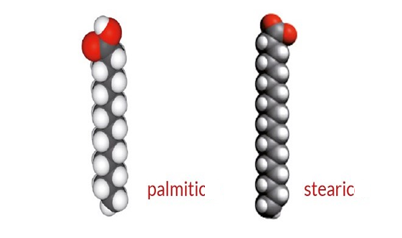 From these premises it appears that those which have the greatest impact on the insulinemic curve are long-chain saturated fats, such as palmitic (C 16: 0) and stearic (C 18: 0) (Figure1). To set up a circadian diet it is important to provide for the maximum calorie intake in the early stages of the day; for example, 2/3 of the total calories between breakfast, lunch and various snacks and with light dinner, in terms of insulin demand.

The sequence of meals must also be modulated according to the different activities carried out (type of work, sport, etc.) and according to the obligatory dinner times. If it is not possible to bring forward the time of the last daily meal, it should be ensured that its load – in terms of calories and macronutrients – is inversely proportional to its time.

A low insulintropic effect is obtained with a mainly vegetable meal, with few proteins (mainly from vegetable or fish sources) and mono or polyunsaturated fats. Any starchy carbohydrates will be chosen from those with low glycemic impact also in order not to stimulate the endogenous formation of saturated fats.

To keep the insulinemic response of the evening meal to a minimum, it is necessary to reduce or exclude the sources of saturated fats present in fatty foods (cured meats, aged cheeses, mascarpone, etc.) or in added seasonings (butter).