DGLA – at the crossroads of pro- and anti-inflammatory processes

DGLA – at the crossroads of pro- and anti-inflammatory processes

In erythrocyte membranes, the deficiency of dihomo gamma-linolenic acid (DGLA) and excess of arachidonic acid (AA) are situations related with silent inflammation and poor immune modulation.

The found incidence – on the basis of the analysis Fat Pharmacy 2014 made to the Italian subjects and gathered in the Lipinutragen data base- was one upon three individuals for the lack of DGLA and almost one upon two for the excess of AA.

To restore the balance of the molecular parameters relating to immune defense (lack of DGLA) you will have to increase the intake of gamma linolenic acid (GLA), for which there are no relevant food sources, if not borage seed oil. To address the lack and obtain the anti-inflammatory action is necessary the incorporation of DGLA into the membrane.
A synergistic cocktail containing GLA (from high GLA-containing natural source), alpha glycerylphosphorylcholine (alpha-GPC) and a pool of antioxidants that provide protection during the biodistribution, ensure the targeted action against the imbalance.

Even an excess of inflammatory response, characterized by high values (excesses or borderline) of arachidonic acid (AA), may be accompanied by deficiencies of DGLA.
In this particular case the integration of GLA must be carried out simultaneously with alpha linolenic acid (ALA). The nutraceutical supplementation will be effectively and efficiently carried out with a product that provides GLA and ALA in the right proportions.

At dietary level is useful to advise the intake of vegetable sources of ALA, such as linseed oil (54.2%), nuts (6.21%), green vegetables, including spinach (0.35%).
In the formula other fat components are simultaneously evaluated, which can influence the inflammatory fate, such as for example the presence of the omega-6 precursor (linoleic acid, which activate the omega-6 pathway), or if there are saturated fatty acids which are present in nutraceuticals but very rarely well indicated in the nutritional labels! 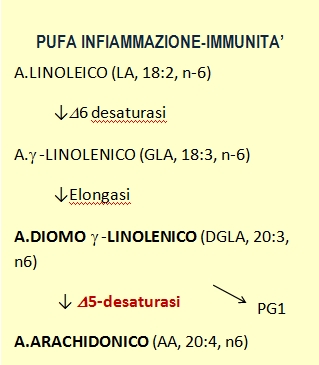 PUFA for INFLAMMATION and IMMUNE FUNCTIONS

The centrality of the role of DGLA is related to the activity of the Δ5-desaturase, of which it’s its substrate.

Its transformation into AA, the precursor of prostaglandins (PG) 2-4 inflammatory depends on how the desaturase enzyme works, which can ‘be inhibited by fatty acids of the omega-3 family. When a sufficient competition for the desaturase delta-5 enzyme is provided, DGLA remains available for the the route of prostaglandin synthesis (PG1 series), which improve the functioning of the immune system (Fig.3). It is well known that DGLA, PGE1 and prostacyclin increase immune responses and tumoricidal action of macrophages.

DGLA not transformed into AA enters in the phospholipids (PL) of the membranes, from which, if necessary, will be released by the action of phospholipase A2 thus competing with AA for the cyclooxygenase enzymes that produce prostglandins. Therefore, supplementation of DGLA can move the DGLA / AA ratio so as to reduce the production of pro-inflammatory factors, in favor of the anti-inflammatory, with beneficial effects for a number of pathologies. We must not forget, however, that DGLA as other polyunsaturated fatty acids undergoes oxidative radical reactions. It follows that its supplementation to control the pro-inflammatory processes, activating the synthesis of anti-inflammatory compounds, requires a concomitant, synergistic administration of anti-oxidants (vitamins A, C, E, beta-carotene), to carry out preventive action of lipid peroxidation during biodistribution.