INTESTINE: the interface between the external and internal environment of the organism

In the jargon the intestine is identified with its excretory activity, but it is ignored that this organ is home to multiple functions, some of which produce effects on organs and systems external to the gastro-enteric tract. Its coating epithelium is the mucosa with the largest surface of the human body and represents the interface of passage from the external to the internal environment of the organism.

The main functions of this physical, biochemical and immunological barrier are those of:

The intestine cannot be considered separated from its mucus layer and from the microbiota that has formed since the intrauterine life (with its bacteriocins, cytokines and immunoglobulins), but should be considered as a single functional unit (Fig. 1). 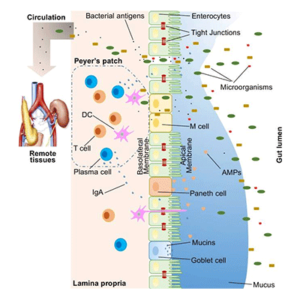 The link between the intestinal lining and the discovery of zonulin

Although there are numerous studies on leaky gut, this condition has not yet fully emerged from the field of research; its presence in the onset of food intolerances and extra intestinal autoimmune pathologies is well established and continues to grow (3).

Until the mid-seventies, the cells of the intestinal epithelium were thought to be “glued” together seamlessly and only the mechanism of passage of substances through the enterocytes (transcellular absorption) existed.

The discovery of zonulin was fundamental for the understanding of intestinal permeability.

Starting from studies on cholera and then, after those, on celiac disease, the Italian doctor Alessio Fasano discovered the existence of a protein called zonulin (4) that combines the intestinal epithelium in tight junctions, leaving 15 Angstrom space. This discovery made possible the development of knowledge on the mechanisms that regulate the paracellular passages, revealing that it is a dynamic system that can open or close this communication path based on certain stimuli.

The main causes of an alteration of the function of the intestinal barrier, accompanied by the activation of zonulin, are:

The triad Genetics – Environment – Microbiota assumes the key role in the pathogenesis of diseases related to abnormal intestinal permeability and, the last two, are the elements on which prevention can be performed.

Genetics, once considered the most important determinant of our destiny, has been significantly reduced after the discovery that our code is made up of only 23,000 genes, compared to about 120,000 expected.

The “diet” element to nourish the components of intestinal microflora 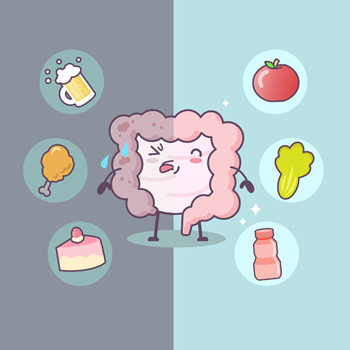 It is clear that the most important environmental factor on which to act is the diet that, besides nourishing ourselves and being a key to epigenetic modulation, supplies food for the colonies of microorganisms inhabit our intestine. For the same reason, industrial foods, rich in additives, colourings, preservatives, etc.*, become almost indigestible and not suitable for supplying the healthy components of our intestinal microflora. We must remember that the rapid food changes occurred in the last decades, have distorted human nutrition, unbalancing and impoverishing it with nutritional values ​​and fibers; this has also led to changes in the type of commensal microbiota, reducing wealth in species and changing relationships.

*The main additives to watch out for and whose presence is growing exponentially in a wide variety of foods, including baked goods, preserved meats and dairy products are: sugars, salt, emulsifiers (e.g. mono- and diglycerides), organic solvents, nano particles, microbial transglutaminase, enzymes (5).

The presence of a leaky gut allows the access of an antigen from the intestinal lumen to the immune system present in the lamina of the intestine with consequent activation of the lymphoid tissue and the production of a cascade of immune reactions.

Which pathologies are associated with leaky gut syndrome?

The main pathologies for which the scientific literature confirms the association of intestinal permeability syndrome are:

How to intervene in case of impaired intestinal permeability: 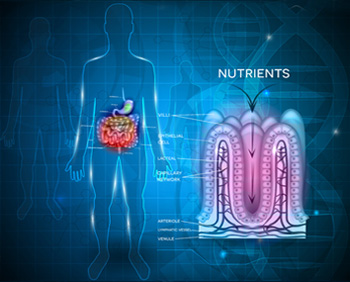 It is advisable to monitor food allergies and intolerances, including non-celiac gluten sensitivity followed by an appropriate diet.

For those who are celiac, it is advisable to periodically check their diet and the presence of cross-contamination.

Reduction or occasional consumption of alcohol. Use of NSAIDs only as needed or in accordance with updated treatment plans.

Exclude the packaged products and all foods containing the additives mentioned.

There are specific supplements that have regulatory action on the intestinal epithelium such as glutamine, zinc, probiotics and Saccharomyces boulardii, as well as some drugs still in clinical trials, which would act directly on the “tight junction“.

The diet tips, written in the article, are not intended to be a substitute for a personal nutrition plan and are to be adapted to specific cases.

Photo: 123RF Archivio Fotografico | ©Irina Strelnikova, 86189593, 2018-02-10 | ©Wang Chun-Kuan, 69812970, 2018-02-10 | ©guniita, 67016194, 2018-02-10 | Fig. 1: © 2017 Mu, Kirby, Reilly and Luo. This is an open-access article distributed under the terms of the Creative Commons Attribution License (CC BY). The use, distribution or reproduction in other forums is permitted, provided the original author(s) or licensor are credited and that the original publication in this journal is cited, in accordance with accepted academic practice. No use, distribution or reproduction is permitted which does not comply with these terms.

What is KEFIR? Property, benefits and preparation

FAT PROFILE - at the base of feeling good