The functional body-mind unit, the source of well-being

The modern lifestyle is accompanied by some unpleasant effects, including excess stress and low-grade chronic inflammation. These two conditions, associated, significantly aggravate the quality of life contributing to the general feeling of malaise and the onset of numerous pathologies including hypertension, atherosclerosis, non-alcoholic liver steatosis, depression and tumors (1).

The scientific community has turned its attention to meditation practices, for their ability to reduce the phenomena mentioned and positively affect the state of health. These practices also include mindfulness, appreciated and used both by complementary medicine and by various schools of psychotherapy as well as by attentive people and looking for ways that simply make them feel better.

“Mindfulness means paying attention in a particular way, with intention, in the present moment, in a non-judgmental way” (Jon Kabat-Zinn, founder of the Stress Reduction Clinic and the Center for Mindfulness in Medicine)

Mindfulness has its roots in the ancient Buddhist practice of vipassana or sati in the Pali language; the modern term, however, was coined in 1910 by the Buddhist scholar Rhys Davids (2).

Starting from the first MBSR protocol (Mindfulness-Based Stress Reduction), developed in the 70s in America by Jon Kabat-Zinn for stress management, others were born with interesting applications also in the clinical field. For more information >> https://www.lipinutragen.it/en/eating-healthy-on-vacation/

The common denominator of the different protocols is the development of the person’s awareness by bringing the individual back into the present, facilitating the mind-body centering, in antagonism with the thoughts in continuous movement oriented on doing, and not on being, that go along with the typical speed of today’s rhythms of life.

In Italy, the Institute of Neuropsychosomatics in Bagni di Lucca, recently recognized by the European Association for Body Psychotherapy, has developed a body approach based on mindfulness which includes practices such as “body scan” for work on psychosomatic blocks and “no-mind “or the inner silence.

Studies on the beneficial effects of mindfulness are increasing exponentially and the impact of this practice on human health and beyond, on aspects related to relaxation, emotions, attention, calm, etc. is increasingly evident.

Dealing with the scientific bases of the benefits of mindfulness, the effects related to the reduction of stress hormones, such as cortisol and catecholamines, or to the regulation of neurotransmitters and other cellular messengers, such as cytokines, emerge.

It should be remembered that both inflammation and stress are physiological processes that in the course of evolution have helped the human being to heal from wounds, infections, etc. with reparative processes or to keep the body reactive with respect to various types of stimuli or dangers, then returning to balanced conditions (allostasis).

Some molecular mechanisms have been deepened by an important review of 18 studies on Frontiers in Immunology (3) regarding the impact of mind-body practices – such as mindfulness – on gene expression or on the “turning on or off” of certain switches in our DNA.

As mentioned above, stress is a natural and physiological response in limited situations while it becomes unnatural (from an evolutionary point of view) and problematic when it lasts over time becoming chronic.

Stress, with the activation of the sympathetic nervous system, increases the production of the nuclear transcription factor kB (NF-kB). The latter connects stress to inflammation through the expression of the genes that produce pro-inflammatory cytokines (4). Another important mechanism concerns a stress-related molecular pattern called CTRA which is hyperactivated following negative events such as bereavement, diagnosis of cancer, trauma and in difficult socio-economic conditions. CTRA at the gene level increases the pro-inflammatory cellular activity and reduces that of genes with antiviral and antibody action, making the body more susceptible to infectious agents such as HIV-1, Epstein-Barr virus, herpes simplex, etc.

The results obtained from this review, albeit preliminary, show that the mind-body interventions determine molecular changes with consequent lower expression of the inflammatory (immuno-) pathway of the NFkB and CTRA which are activated by stress, with all the critical health issues. indicated.

The connection between stress and inflammation

Since chronic stress activates inflammation, both centrally and peripherally, it is not surprising that several other researches and meta-analyzes indicate that mindfulness reduces inflammatory markers such as TNF-α, PCR, IL-6 and also metabolic parameters such as blood pressure, frequency cardiac and triglyceridemia (5).

A neuroendocrine link between stress and inflammation can be search in the connection between the nervous system and the immune system through the cholinergic pathway of the inflammatory reflex (6).

It is a reflex that inhibits “Cholinergic anti-inflammatory pathway” (CAP) inflammation and integrates with other complex mechanisms, including humoral action through ACTH and cortisol and that of the sympathetic nervous system (SNS). 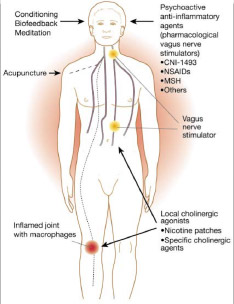 The vagus nerve (parasympathetic component of the autonomic nervous system) with its afferent fibers receives an inflammatory signal from the periphery (eg TNF- α, IL-1), produced by macrophages of damaged tissues in various capacities. This input from the periphery is integrated centrally (CNS) from which an anti-inflammatory reflex mediated by the efferent fibers of the vagus nerve starts, with the release of acetylcholine which inhibits the inflammatory cytokines TNF α and IL6.

At a molecular level, acetylcholine interacts with the alpha-7-nicotinic receptor (cellular regulator of inflammation) on tissue macrophages, thus inhibiting the release of pro-inflammatory cytokines, but not of anti-inflammatory ones, such as for example. IL10.

Since vagus activity is regulated by brain centers such as the prefrontal cortex and the amygdala, which are also involved in the mechanisms of control and response to stress (7), it is evident that the continuous perception of threats can modify the functioning of these important processes.

Finally, it should be noted that all inflammatory and anti-inflammatory processes concern “pathways” that involve Omega-3 and Omega-6 fatty acids in the cell membrane, as precursors of signal molecules. A balance in this sector is fundamental and obtainable, where it is not there, through suitably calibrated nutritional and nutraceutical contributions, avoiding both deficiencies and excesses.

Mindfulness is fully part of the “mind-body” or stress reduction practices that can be combined with proper nutrition and physical activity in pursuing one’s own path of health and well-being.

The essentiality of polyunsaturated fatty acids

Oat: the balanced grain for the summer