Omega-3 allies of the immune system

Omega-3 allies of the immune system

The immune system carries out its defensive action against pathogens by implementing two types of response. The first one is that of the inborn, rapid and non-specific immune system, consisting of:

• physical barriers such as the skin and intestinal epithelium that prevent the accesses of pathogens;
• antimicrobial peptides, complement system and a whole series of cells such as macrophages, mast cells, natural killers, dendritic cells, granulocytes capable of intercepting pathogens with a pattern recognition mechanism of specific receptors.

The inborn system carries out its activity through inflammatory processes and its effectiveness and speed reaction remains unchanged even after repeated exposure to the same pathogen.

The second immune response is the one of the adaptive system which involves the interference of antigen-specific cells, T lymphocytes capable of specializing in characteristic T cells and B lymphocytes capable of secreting specific antibodies for the single pathogen. The adaptive system develops an immune memory with the first exposure to the pathogen, therefore during a possible second exposure, its response will be faster and more effective.

An efficient immune defense is the result, in addition to the close collaboration and regulation of all cytotypes of the immune system, of the secretion of cytokines and chemokines, regulatory molecules capable of pursuit the immune cells to the site of attack and regulating their activation or the suppression, in a concert of modifications of cellular metabolism and of the activity of immune cells.

Nutrition plays an established role in supporting the immune system. Several clinical data confirm that certain vitamins, certain minerals and some fatty acids, such as omega-3 alpha linolenic acid (ALA), eicosapentaenoic acid (EPA) and docosahexaenoic acid (DHA), play a decisive and complementary role in supporting the mechanisms of immunity./span>

EPA, DHA, ALA and where to find them 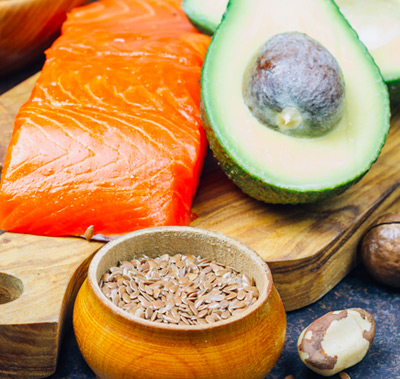 ALA, EPA and DHA are polyunsaturated fatty acids of the omega-3 series; we are able and we must assume them with the diet because although EPA and DHA can be synthesized from ALA through complex metabolic processes, which involve enzymes such as elongase, desaturase and beta-oxidase, the efficiency of their conversion in Mammals, including humans, has a low efficiency.

It should be kept in mind that foods containing omega-3s also carry a good amount of omega-6, less involved than omega-3s in the health of the immune system, while remaining notable of great attention because they are involved in their balancing.

Molecular mechanism and the role of omega-3

The molecular mechanism subtending this activity is the “lightning” of some genes controlled by nuclear transcription factors present in most cells. In fact, omega-3s are able, by binding, to activate certain transcription factors that modulate a whole series of cellular and metabolic events that have as their goal the activation of immune cells.

The omega-3 taken with the diet or by means of integration, are incorporated in all cells of the body and by virtue of the structure of their carbon chains, carrying several double bonds that force them to fold, cannot stack neatly in the membrane. This characteristic has as a result a greater fluidity of the biological membranes that is reflected on the receptor function and therefore on the health of all cells, including the immune system.

The regulatory mechanisms of omega-3 immunity are cytospecific:

Diet in support of the immune system

In the case of diseases in which the blameworthy is a pathogen, we must hope not to come into contact with it and it is not reasonable to think that a correct diet can limit the risk of contagion nor allow us to recover.

What we can really do through nutrition, on the other hand, is to prepare our body to deal with any disease in the best possible conditions, choosing every day to consume foods that can support the immune system, such as omega-3s. However, we must remember that the beneficial result is the result of coordinating all nutrients and that the intake of one nutrient conditions the effectiveness of the other, enhancing or inhibiting its action. Among the most useful micronutrients to support the immune system are vitamin D, zinc, magnesium, copper, selenium, vitamins A, C and E, and some vitamins of the B complex. In particular, vitamin D together with zinc and omega-3s can be considered real modulators of the immune response. Optimizing these nutrients, in the context of a healthy and balanced diet, allows us to have a fundamental tool for protecting health and above all in prevention.

The food recommendations in the article are not intended to replace a personalized food plan and are to be adapted to specific cases.