The immune system has among its functions that of protecting the body from external agents such as viruses or bacteria through the production of antibodies (acquired immunity) or specific classes of leukocytes (innate immunity). Normally this defensive structure attacks foreign antigens but not the cells of its own body. In some cases, however, the system goes into confusion and mistakenly attacks the cells it should defend, its own “self”, giving rise to all the pathologies defined as autoimmune. There are about a hundred autoimmune diseases from the most common to the rarest and they have different characteristics and target tissues.

Some of the well-known autoimmune diseases

The incerasse in cases and genetics

The prevalence of autoimmune diseases is recording a marked increase in the most developed countries since the post-war period and, in the USA, it is estimated that 1 in 13 people are affected. For some of these, such as DMT1 and celiac disease, a genetic component is known, but the growth of cases over a generation or two cannot be explained by genetic determinants alone; In support of this, and on the importance of the environmental component in the context of autoimmunity, are the genetic studies on homozygous twins which show that only in less than 50% of cases both siblings develop the disease (1). 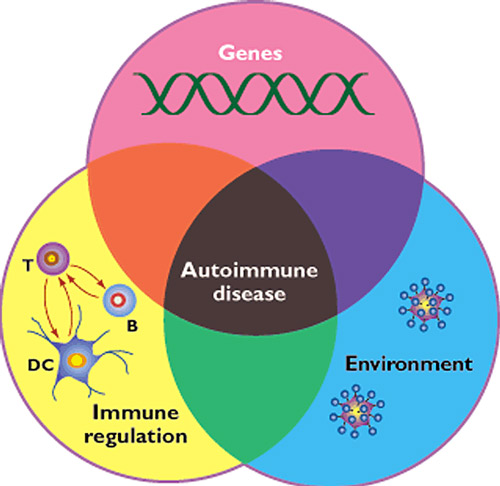 Figure 1: Convergence of genetic, environmental and immune dysregulation components in the generation of autoimmune diseases (1).

Environmental factors are represented by external so-called “non self” elements. For an example giving of an external factor, we can quote celiac disease in which gluten, contained in cereals and derivatives, represents the external element that triggers the defensive reaction against tissue components of the small intestine. In other cases, such as in Guillain Barré neuropathy, the environmental factor triggering an aberrant immune response is represented by an infectious agent such as Campylobacter jejuni, Epstein Barr virus, or the flu virus to name a few.

Several studies have also identified other environmental factors involved in the mechanisms of autoimmunity in the numerous additives that are present in processed foods (2), and others in chemical residues including the widespread herbicide glyphosate.

The hygiene hypothesis arises from the observation that in the most industrialized countries there has been, in the last 40 years, a decrease in infections and a parallel increase in autoimmune diseases and allergic phenomena. Higher hygiene determines the body’s lack of contact with a variety of microorganisms – pathogenic and non-pathogenic – that stimulate the immune system such as regulatory T lymphocytes and Toll-like-receptor. This hypothesis, born in the late 1980s (4), has expanded over time to include other predisposing factors related to lifestyle that accompany economic development, such as changes in nutrition. And it is precisely the dietary changes that have a major impact on the intestine and the microbiome.

The mechanism linked to intestinal immune phenomena begins with the activation of dendritic cells by the antigen and ends with the production of regulatory T lymphocytes that will help to counteract future contacts with the external agent. In allergies and autoimmunity, an excessive response to the antigen is determined. The regulation mechanism induced by intestinal parasites starts from the antigen-antibody bond (IgG or IgE) which triggers other elements of immunity. These, like dendritic cells, produce mediators (interleukins) that stimulate the production of Th2 and T reg class lymphocytes that regulate the immune response to antigens, avoiding hypersensitivity phenomena.

The emerging role of the intestine and microbiota

The intestinal epithelium together with the mucus layer and colonies of microorganisms (intestinal microbiota) represent the barrier that effectively separates the organism from the external environment represented by what enters through the digestive tract. Knowing that over 70% of our immune system resides in the intestine, it is clear that the state in which this organ is found – including the functional system represented by the microbiota that hosts it – plays an important role in immune regulation.

In particular, the key role of the tight junctions between the cells of the intestine emerged which – together with the mucosal immune system – guarantee the integrity of the small intestine barrier which must not show abnormal phenomena of permeability called “leaky gut”. An intestine in conditions of impaired permeability does not act as a selective barrier to the unwanted entry of antigens, toxins or bacteria that pass into the underlying tissues and into the bloodstream, giving rise to inflammatory phenomena.

Another element of fundamental importance is a balanced microbiota that presents colonies of bacteria, viruses and fungi in a balanced condition (eubiosis) and protective from pathogenic species and inflammation. Leaky intestines and dysbiosis * are an emerging element in the context of autoimmunity phenomena.

* Dysbiosis: term describing a qualitative and quantitative change in intestinal microbial species that alters the normal balance and formation of fermentation products. Dysbiosis is often associated with inflammatory phenomena and intestinal problems.

Currently the scientific world hasn’t found a consents on what the role of diet may be in autoimmune diseases and patients are generally not given indications on what diet to follow. There are some dietary approaches (mainly of US origin) based on exclusions of food groups, such as certain types of cereals or milk and derivatives, which should be explored; have shown positive results in preliminary studies, but also criticalities in the balance of nutrients or in the depletion of intestinal microbial diversity, generating other types of problems.

However, food remains an environmental factor on which it is worth intervening anyway, even in the absence of evidence that, in the nutritional field, is always difficult to obtain. It may be useful, for example, to follow a diet that preserves intestinal integrity, microbiota biodiversity and immune modulation.

Among the most studied protective micronutrients of intestinal permeability is vitamin D which induces the gene expression of proteins such as zonulin and occludin which are responsible for maintaining tight enterocyte junctions.

Another very important nutritional element for intestinal health are the fibers. A low-fiber diet lacks substrate for the microorganisms that ferment it to form protective short-chain fatty acids (SCFA) and induce the formation of protective mucus typical of a healthy intestine. The modern diet has depleted both in the quantity of fiber (17 g / day against the 30 g / day provided for by the LARN) and in the variety (a few species of edible plants against the hundreds of the most archaic populations).

As for fats, it has been seen that long-chain saturated ones have an action on some bacterial types (eg Oscillibacter) that deplete the colon of mucus or induce an imbalance in the classes of T lymphocytes, increasing the proliferation of Th1 and Th17 involved in autoimmune phenomena and in the generation of pro-inflammatory cytokines.

Exactly opposite activities were observed with SCFAs (produced by the fermentation of fibers) which showed a stimulatory effect on the expression of regulatory T lymphocytes with a positive effect on autoimmune and anti-inflammatory phenomena.

It is also worth mentioning Omega-3 fats, in particular EPA and DHA, for their direct immunomodulating and anti-inflammatory action through bioactive metabolites such as resolvins, protectins and maresine and the balancing of pro-inflammatory metabolic pathways. In addition to the more studied uses of Omega-3s for cardiovascular health, their beneficial effects can manifest themselves in problems that have an inflammatory nature and immune imbalance, as in the case of autoimmunity (6).

Meat yes, but with quality fats!