Celiac disease and intolerance to gluten

Celiac disease and intolerance to gluten

What is Celiac Disease? 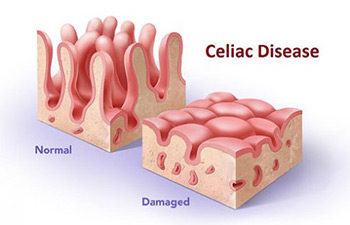 The celiac disease (CD) is an autoimmune illness characterized by a chronic inflammation of the small intestine; in this pathology is verified a flattening of the villi, owed – in genetically predisposed subjects – to the irritating action of the gluten. Particularly, it refers to the protein components rich in gliadin and glutenin, which is found in wheat, barley and rye (1).

The clinical treatment currently for celiac disease is a strict, gluten-free diet; restoring a normal condition of the injured mucosa.

The popularity of CD in Italy is estimated at 1 in 100 to 1 in 150 (400,000 individuals), of which less than 10% are diagnosed (35,000 individuals). The diagnostic difficulty also lies in the fact that there are silent and latent forms, or for the presence of extraintestinal symptoms or other autoimmune diseases that distract the attention of the physician to other disorders. 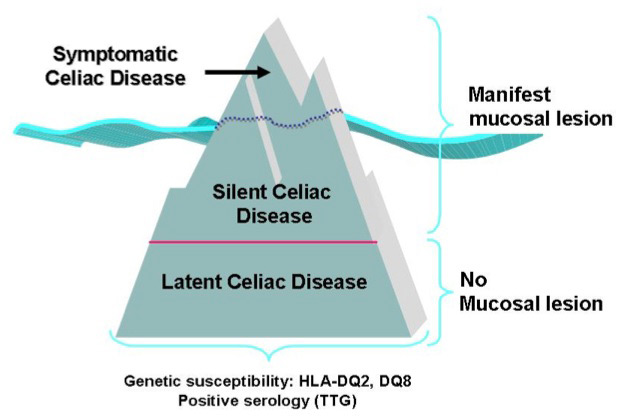 The iceberg represents the actual size of celiac disease. This model was proposed in the 80 by Logan, British epidemiologist, and still is considered valid (2).

In summary, the detection path of the disease begins with a simple blood test looking for certain antibodies. To confirm the damage to the villi is usually performed a biopsy using gastrointestinal endoscopy. For this reason, in case of suspect of diseases related to gluten, it is fundamental to resort to a diagnostic path followed by a doctor, without exclude gluten arbitrarily or following the trend of the moment.

An abnormal element in recent years is represented by the growth of the prevalence of this autoimmune disease (as of other). The US data indicate a doubling of CD cases every 15-20 years, which can not be explained by improved screening methods or considering the genetic predisposition and the exposure to gluten the unique two variables.

Researchers are advancing hypotheses that consider the role of other variables, such as the immune weakening related to improved sanitation (hygiene theory), the entire intestinal ecosystem change (defined microbiota) and alteration of the intestinal barrier. These factors lead to a loss of immune tolerance in charge of reactions triggered by cereals containing gluten proteins. The key elements, in this wide view, turn out to be (3):

Predisposition to the disease: key elements

It is known that the first phase and the first years of life play a key role in the formation of a balanced microbiota. In particular, in these following “aspects”: type of delivery (natural or caesarean), recurrent infections, overuse of antibiotics, breastfeeding and balanced and health nutrition.

You may be wondering why a food such as wheat, which has accompanied the human civilization, should be considered an element, in some way, to look at with suspicion.

In an evolutionary vision, whereas the history of the human species began 2.5 million years, the grains containing gluten entered in human nutritional habits “only” 10,000 years ago, with the advent of agriculture. This time, though long, has not allowed a functional genetic adaptation to digest these proteins. In particular, in the human intestine, there is a lack of the enzymes capable of cleaving some parts of the chains that make up the gluten – called polypeptides. These protein fractions, not completely digested, can trigger immune reactions that end in a tissue attachment of its villi enteric.

Remember that gluten is a protein that does not have a high biological value as it is poor amino acid lysine and methionine. From an operational standpoint, the two gliadin and glutenin fractions, forming a sticky structure with optimum characteristics for processing of the mixtures, which allows an easy rising of all bakery products.

* The products in this category, though not certified, may contain gluten due to contamination that can occur in crops, storage or further processing. In case of full-blown disease, buy products with certification, with the crossed-out corn stamp.

Recommendations for the gluten-free diet:

The gluten-free diet can be followed without problems in the style of the Mediterranean diet, with the consumption of vegetables and fruits (on the base), then grains (in this case gluten-free) and legumes, dried fruits, animal protein (especially fish), cheese and milk (if tolerated). The main condiment is the extra virgin olive oil.

The diet tips, written in the article, are not intended to be a substitute for a personal nutrition plan and are to be adapted to specific cases.