The diet of modern society

Modern society, largely urbanized, is characterized by a strong sedentary lifestyle and by an ubiquitous presence of poor quality food, low in nutrients, inexpensive, but highly caloric. These characteristics make the western world highly obesogenic with all the health problems and chronic-degenerative diseases related to excess body fat.

Contrary, it is known that man has evolved in an environment with limited food resources and subject to cyclical periods of famine. Environmental pressure of this type made it possible to select the so-called saver genotype (thrifty gene hypothesis) which, in conditions of alternating presence of nutritional resources, is able to accumulate fats more easily. The stored depository fats, thanks to a greater insulin resistance, will then be used sparingly in times of famine. This phenotypic characteristic, successful over the centuries characterized by the non-constant presence of food resources, becomes instead a negative aspect for the modern society man. Food has become always available 24/7 all year round, without seasonal alternation exposing us to all dysmetabolic diseases such as obesity, hypertension and diabetes.

The negative effect of this, is current observed in populations that until a few decades ago lived in a traditional way and only recently have been “civilized” with Western food and the “cozy” and therefore sedentary lifestyle. This is the case of the Pima tribe, Native Americans of Arizona, who represent a living example of this transition of lifestyles with the consequent achievement of a very high levels of diabetes and obesity (up to over 75%) (2).

With the aim of curbing the obesity, at the beginning of the 1900s the model based on the hypothesis of energy balance made its way, which sees the increase in body weight as an imbalance between incoming energy (the intake food) and consumed energy (basal metabolic rate + activity). 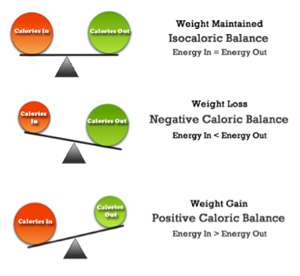 The model made its way in an era in which endocrinology had not yet developed and, in a very simplistic way, it equated the organism with an oven. Recall that in those times calorimeters were available and knowledge of the physiology of nutrition in its complexity as well as the metabolic axes that regulate energy expenditure were lacking. Not intending to refute the physics’ laws, it must in fact be considered that biological systems have homeostatic mechanisms that can alter the energy quotas dedicated to accumulation, rather than thermogenesis, or even the different degree of absorption or assimilation of nutrients, etc.

This calorie-centered model therefore appears limited and does not consider that the human body has an energy requirement below which it should not go down in order not to trigger defense mechanisms and energy savings typical of the saver phenotype.

Energy expenditure and consequences for the body

The total energy expenditure in the 24 hours (EE) is given by the Basal Metabolism (RMR) (sum of the expenditure of all organs and systems) + Thermal Effect of Food (TEF) (energy expenditure for the digestion of food and absorption) + Motor Activity, divided into Spontaneous (NEAT) and Voluntary (Exercise).

The following figure shows that the largest share of energy expenditure in 24 hours is given by the basal metabolism (Resting Metabolic Rate) which represents the cost, in terms of energy, of being alive and functioning. Digestion and assimilation of food depends very much on the type of food (consistency, presence of fibers, etc.) and on the metabolic conditions of the subject. Voluntary physical activity is on average a lower percentage than involuntary daily activities. 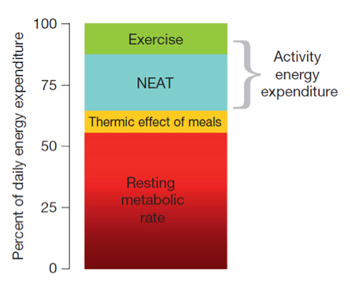 Figure 2:
percentages of energy expenditure by categories: Resting Metabolic Rate represents between 60-80% of the total, Thermic Effect of Meals / Food 10%, Physical activity (voluntary and otherwise) a very variable percentage between 20-50%.

Quite simply, if an individual with excess weight and body fat, introduces too many calories compared to his needs, it is obvious that eating less (and doing more exercises) represents an appropriate solution.

Contrary, for a person with excess body fat who eats less than his basal needs, perhaps with a past of drastic low-calorie diets, a reduction in energy intake can hardly be an effective strategy. An excessive calorie reduction, compared to individual needs, is interpreted by our neuroendocrine system as a stressor and will push the body to express the so-called saver phenotype, thus adapting to the calorie restriction without losing weight.

Lipids, from enemies to allies

Since fat is the highest energy macronutrient (about 9 kcal/g), the response to obesity based on the energy balance model has generated low-calorie diets with low fat content. In the 70s, the main nutritional guidelines established that the correct diet was the one with low fat and with the highest presence of carbohydrates. Based on this facts a whole industry of light and low fat products has developed, but with the presence of lots of sugars. It is clear to everyone that this model has been a failure and that diabetes and obesity (diabesity) has doubled several times in the past 40 years.

For this reason, dietary fats have been so reviled and only recently are they returning to the fore and acquiring a role of primary macronutrient and moving to a higher percentage (up to 35% of total calories) recommended by the guidelines for healthy nutrition (LARN IV edition, 2014).

Obviously not all fats are the same and must be intaken choosing between saturated (SFA), monounsaturated (MUFA) and polyunsaturated (PUFA) omega 6 (ω-6) and omega 3 (ω-3), so it is a matter of balancing them by choosing the food sources properly.

Even at the molecular level we can observe that the cell is looking for a lipid balance in its plasma membrane. This is because fats have specific functions depending on the tissue or organ they are composing. In addition to the structural properties, lipids are among other things also signal molecules, fundamental in inflammatory and anti-inflammatory processes. Membrane fat imbalances can be correlated with different metabolic conditions, including obesity.