Lipidomics for athletes: focus on cycling

1 May 2020 by Lipinutragen in Molecular health and nutrition 466

The fatty acids involved in the scaffolding of cell membranes influencing their guaranteed characteristics and efficiency in carrying out a specific activity (e.g. Muscle = Contraction).

In addition to having a structural role, fatty acids are used for energy purposes (e.g. SFA) and are involved in immunity and inflammation mechanisms, as in the case of PUFA omega-6 and PUFA omega-3. The last ones are called essential fatty acids; they must necessarily be in taken with the food as our cells cannot synthesize them, differently from what happens for SFA and MUFA.

The cell membrane is not only a static structure that delimits cells, but it is a very dynamic structure, which responds to the needs of the cell by providing immediately available fatty acids.

The membrane is able to respond to all internal (metabolic state, stress and inflammation) and external (nutrition, environmental factors) variations to which the cell is exposed.

Sport and lipidomics: “union is strength”

The membranes of an endurance sportsman, who follows training programs and carries out competitions that require prolonged efforts and solicitations over time, must be able to respond promptly to these stimuli, with a very intense turn-over of fatty acids.

With the lipidomic membrane analysis, performed on the Mature Red blood cell (mGR), reporter cell of the state of all tissues, the athlete’s metabolic and nutritional status is assessed.

The nutrition of a sportsman who does not provide the intake of PUFA (polyunsaturated) fatty acids, will cause a deficit in the membrane, which will not guarantee the correct exchange of fatty acids with a consequent slowdown in recovery times and cell regeneration, with a reduction in the performance or “overtraining” phenomena. The knowledge of the state of the mGR membranes represents, therefore, useful information to maximize the cellular response to physical effort.

The role of DHA in cycling 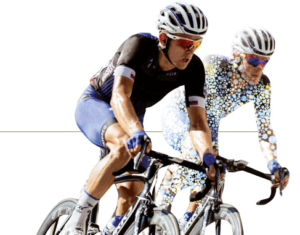 It is known that in physical activity, the organs that are most exposed to stress are the heart and muscles. From animal and human studies, it has been seen that the heart [2] and muscle [3] tissue are rich in DHA, omega-3 fatty acid, suggesting its central role in the physiology of these organs. Supplementation with fish oil (rich in DHA) has been shown to reduce heart rate and oxygen consumption used during submaximal effort (anaerobic threshold) in professional cyclists, with an increase in fatigue resistance [4].

Under this evidence, the Lipinutragens’ Scientific Team, has studied the effects of a training and an endurance race, in amateur cyclists, studying the membrane of their mGR (mature red blood cells) to identify the changes and the stresses caused by the intense physical effort.

The results of this study, published in the special journal of the “Journal of Strength and Conditioning Research” [5], show that, during a resistance training (2 consecutive training sessions of 100 km each) and an endurance race (cross-country ski race “Colle delle Finestre” from 96km), there is a change in the composition of the membrane fatty acids of the mGR measured before and after training and before and after the race.

In particular, it has been seen that:

• 86% of cyclists had a DHA deficit (compared to the normal values ​​observed in the Italian population [6]) even before training. This deficiency was even more evident after training;

• the depletion of DHA is even greater following a tender, with a reduction of approximately 2 times the DHA in the membrane (from 4.4% pre-tender to 2.4% post-race);

• a few weeks’ supplementation based on DHA (250mg / day) * is sufficient to bring the DHA back into the membrane to the optimal values ​​ (7.3% DHA after 9 weeks of supplementation).

In this study, a rapid change in the composition of membrane fatty acids has been observed, testifying to their dynamism in response to a sub maximal and maximal effort. In particular, there is a strong involvement of DHA, omega-3 fatty acid known to be involved in inflammatory and stress mechanisms, both intensified during the endurance effort and to a greater extent during the race, where the intensity of the effort requires an increase of Bio-available DHA (free DHA).

These membrane changes cause a lower efficiency of muscle and cardiac oxygen consumption with a decrease in fatigue resistance and a decrease in athletic performance.

The lipidomic analysis of the mGR FAT PROFILE, with the above premises, is a useful and reliable tool for monitoring the balance of the membrane and for establishing a personalized lipid integration to be combined with nutritional advice and training techniques aimed at optimizing sports performance.

This information can be helpful, to all athletes and all professionals in the sport field, to start personalized integration plans by supporting the athlete during the competition periods and / or in the preparation phase, in order to guarantee maximum functionality of the tissue and avoid performance drops.

The essentiality of polyunsaturated fatty acids

Sport and nutrition, the winning combination!

22 May 2020by Lipinutragenin Molecular health and nutrition