The way to healthy longevity

The way to healthy longevity

Healthy ageing: from Lifespan to Healthspan

A few weeks ago, an article was published in The New Yorker magazine entitled: Can We Live Longer but Stay Younger? The question of a not only longer but healthier life is emerging as a result of the aging of populations. In this regard, both government agencies and international organizations, together with the medical-scientific world, are focusing the attention on how to have a healthy life rather than just a pure extension of average life. The European Commission, for example, has established a specific strategic program called Active and Healthy Aging for active and healthy aging (1).

In the last 100 years we have witnessed a considerable increase in life expectancy in Western countries, in many cases increased by over 20 years, thanks to the progress that led to a reduction in early mortality (infantile, perinatal, infectious diseases, among the most relevant) that represented in Italy, at the beginning of the 20th century, over 30% of the causes of death. This lengthening of life expectancy – which in Italy we remember is currently 80,2 years for men and 85 years for women (2) – is recently showing a negative side effect due to a lower number of years lived in health. According to data from the Ambrosetti Institute, the years lived in unhealthy conditions have gone from 13.7 in 2005 to 20.8 in 2014; this data is in accordance with the increasingly early onset of chronic degenerative diseases, a multifactorial phenomenon and not only linked to age as a risk factor.

In the 2000s Dan Buettner, a National Geographic journalist together with a team of experts, based on studies of gerontology, carried out researches all over the world identifying the 5 geographical areas where the population is the most long-lived and enjoys excellent health. These regions, with the greatest number of happy long-lived, were called Blue Zones (figure 1) (3) and were as follows: Okinawa (Japan), Ogliastra (Sardinia – Italy), Nicoya (Costa Rica), Ikaria (Greece) and Loma Linda (California). 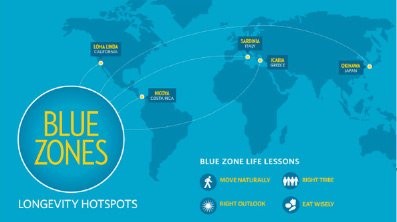 Once the “secret” of this longevity in health was discovered, the researchers tried to identify the key factors, such as the eating habits and lifestyle that these areas share, and then encourage them to propose a sort of “health recipe”.

The diet in these areas “Blue Zone Diet” (figure 2) is based mainly on vegetable foods, with a high frequency of legume consumption, a low presence of meat and the almost total absence of processed foods rich in fat and refined sugars. The exact opposite of the American Standard Diet (figure 3) which has a prevalence of animal sources of protein and fat, many simple sugars, refined foods and very few vegetables.

Physical activity in these populations is not planned and does not have a sequence of exercises, but is part of their daily activities: movement, gardening, vegetable garden care, etc. One aspect that strikes about the eighty-year-olds of Okinawa, for example, is the good psycho-physical form that allows them to perform normally the activities typical of those who are 50-60 years old.

The body mass index (BMI, ratio of weight to height squared) of the Blue Zones long-lived is medium / low and varies between 18 to 22, indicative of a diet without excess calories. The blood lipid profile (LDL, homocysteine, etc.) is optimal, as are the level of oxidative stress.

Other common characteristics of the Blue Zones are the absence of excessive stress, the strong sense of community, the presence of healthy relationships with friends and family, the connection with the environment and a spiritual vision of life which is given a reason and a deep meaning.

The key to longevity therefore lies not only in favorable genetics but in a set of elements that that are among the modifiable factors of lifestyle including: 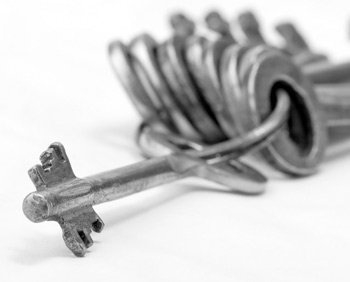 The effectiveness in terms of health of of these lifestyle factors is supported by scientific evidence, among these are noteworthy those concerning the epigenetic mechanisms, because they have effects of modulation of the expression of our genes, expanding the deterministic view that binds our fortunes to the DNA inherited.

Being modifiable elements, lifestyle factors do not represent the destiny of an individual, but the possibility, through their adoption, of an extension of the healthy life period, from the point of view of Healthspan.

Onion: an ally for our health

Exotic fruits, avocado in the kitchen!