Endometriosis: how it manifests itself

Endometriosis is a gynecological disease characterized by the growth of endometrial tissue outside its physiological localization, such as the myometrium, ovary and peritoneum resulting in inflammation, fibrosis, adhesion formation and bleeding during menstruation.

This condition is often associated with pelvic pain and subfertility and severely affects the quality of life of women of reproductive age. Affected women often require surgery when drug therapy fails. Its prevalence is about 10% and up to 7 out of 1000 women are affected each year as well as another significant percentage of undiagnosed cases and even some studies suggest that every woman may have endometriosis as a transient fertile age phenomenon.

The exact pathogenetic mechanism is still not completely clear, but the accepted hypotheses are:

Early menarche, late menopause and obesity can contribute to prolonged exposure to endogenous estrogens which contributes to the onset of the disease.

Endometriosis is associated with an increased risk of developing autoimmune diseases and various forms of carcinoma, not only involving the reproductive system.

The hormonal imbalance in endometriosis mainly causes the alterations of multiple cellular functions and is the basis of a state of chronic inflammation that perpetuates and amplifies the problems of this pathology throughout the woman’s reproductive life. The chronic inflammatory state is also at the basis of the alteration of the pain signal, and progressively increases its sensitivity.

Reactive oxygen species are intermediates produced by normal oxygen metabolism and are inflammatory mediators known to modulate a range of cellular activities and to have deleterious effects on the cell and organism if the physiological balance with antioxidant defense systems was compromised. Macrophages, erythrocytes and apoptotic endometrial tissue that graft into the peritoneal cavity through retrograde menstruation are well known inducers of oxidative stress by releasing pro-oxidative and pro-inflammatory factors, involved in the formation of ROS.

Pay attention to nutrition in case of endometriosis

Lifestyle is fundamental in the onset and course of this disease, the diet in particular is able to control the inflammatory state and enhance the body’s antioxidant capacity, supporting the physiological defense enzymatic systems.

Several scientific studies have reported an inverse association between the risk of endometriosis and the intake of omega-3 polyunsaturated fatty acids. Furthermore, the inadequate intake of these fats by women with endometriosis promotes inflammation and consequently oxidative stress.

On the contrary, omega-3 fatty acids, competing with pro-inflammatory omega-6 fatty acids, for the same enzymes and removing them from the chain of events that induce the production of inflammatory mediators, improve symptoms and the inflammatory state. In addition, the omega-3 EPA and DHA are the precursors of molecules called “resolvins” which have been shown to apply a resolving effect of inflammation in animal models. Studies are still ongoing, but promising if we consider that inflammation may be one of the therapeutic targets of this disease.

Instead, animal fats derived from red meat and milk derivatives, rich in arachidonic acid and trans fats, cause an increase in inflammation and a greater activity of spasms in endometriosis due to the prostaglandins produced.

Antioxidants and a combination of vitamins and minerals have a positive effect on the symptoms of endometriosis.

Research has suggested that there is a direct association between a low dietary intake of vitamin-bearing vegetables involved in supporting antioxidant systems such as A, C, E, immune systems such as D, and a high intake of trans fatty acids, rom red meats and alcohol.

Antioxidants, such as vitamin C capable of preventing lipid peroxidation, vitamin E and beta-carotene have been shown to have positive effects on endometriosis. Vitamin C and vitamin A analogues have been shown to have an inhibiting effect on the growth and size of endometrial cysts. Furthermore, the antioxidant vitamins E and C could be involved in the elimination of free radicals and ROS which are responsible for the growth and adhesion of endometrial cells. Furthermore, supplementation with vitamin C, E and n-acetyl cysteine ​​appears to be able to reduce pain related to oxidative stress in endometriosis. Also fundamental is coenzyme Q10, present in fish such as salmon, sardines, anchovies, mackerel and a powerful antioxidant that works in synergy with vitamins stabilizing our cell membranes. Coenzyme Q10 is also produced by the body, but its production constantly decreases with age or due to chronic diseases and supplementation may be advisable in the case of endometriosis.

A predominantly vegetarian Mediterranean diet is useful for reducing the symptoms of endometriosis. Vegetables, in fact, represent an essential source of vitamins, coenzymes and antioxidants that intervene to support the detoxifying enzymatic systems of the liver.

Improving the detoxification mechanisms is important to cleanse estrogen, decrease the load of free radicals and eliminate xenoestrogens.

The adequate intake of all these nutrients through food and appropriate supplementation is therefore essential for the support and modulation of endometriosis symptoms and to give quality to the life of women who suffer from it.

To have more information:

FORMS OF ADMINISTRATION IN NUTRACEUTICS 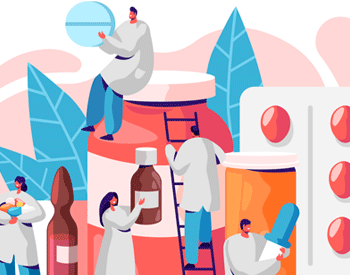