ESSENTIAL fatty acids for the skin

ESSENTIAL fatty acids for the skin

The first evidences of the ability of polyunsaturated fatty acids in the protection of the skin were obtained 90 years ago with the work of the spouses Burr (J. Biol. Chem 1929, 82, 345-367). It was the time when fats were evaluated only for their “calories”, but the work of these researchers highlighted that animals on a diet of sucrose and casein, even if added with vitamins, created serious problems, primarily of a dermatological nature and in general inflammatory, which regressed precisely with the administration of oils in the diet. But not of oils containing saturated fats (palmitic, stearic, lauric acids), but a mixture of olive oil, linseed oil and even better of corn and cod liver (J Biol Chem. 2012 Oct 12; 287 (42) : 35439–35441).

In reality, with these first observations, the researchers began to evaluate the “essentiality” of the polyunsaturated fatty acids, which is well known today, being necessary the intake of linoleic acid (omega-6) and alpha-linolenic acid (omega-3) to form in the human body all the polyunsaturated fatty acids that our cells need, especially the cell membrane. The understanding of the mechanisms by which polyunsaturated fatty acids are involved in the well-being of the skin is constantly updated by new results, but everything points to the advice not to remain depleted of these important molecules. For example, the group of prof. Brash at Vanderbilt University showed how ceramide-bound linoleic acid is transformed into oxidized metabolites that bind to the proteins of the epidermis, producing a “barrier effect” to avoid water loss.

The skin: the portrait of the molecular state

We can say that the skin is the first “mirror” of the molecular state that is obtained in an absolutely personalized way by each of us, through diet and lifestyle, including exposure to the sun, as happens in the summer. And in fact, the eye of a good clinician turns to the complexion and condition of the skin for a first evaluation of the general conditions.

The skin is a multi-layered tissue (epidermis and dermis) with the most important function of creating a barrier, or a relatively waterproof layer of dead cells, to protect the body from dehydration and environmental stress. The intercellular lipid lamellae are composed of ceramides, cholesterol and fatty acids in the stratum corneum. If the skin is in abnormal conditions, i.e. with the loss of these components, both an abnormal transdermal loss of water and an increased cell proliferation can occur; both of these situations are found in the case of deficiency of essential fatty acids. (Kim, J et al. Biosci.Biotechnol.Biochem, 2006, 70, 2086-2095; Zhoh, VA et al Am J Clin Nutr 2000, 71, 361S-366S)

Lipid balance for the well-being of the skin

Epidermis and dermis are metabolically active organs and can synthesize saturated and monounsaturated fats, as well as cholesterol and ceramides. But they must receive essential fatty acids from external sources, since the activity of key enzymes of the metabolism (desaturase) is also scarce in these tissues. Even through the stimulation of ultraviolet rays, the skin is activated in the enzymatic oxidative transformations of fatty acids, and thus the well-being of the skin starts, however based on the balance of the lipid components. In fact, the balance between essential fatty acids is important in order not to create inflammatory conditions, therefore the omega-6 and omega-3 quotas must be well calibrated right from the feeding to allow you to control the efficiency of the skin. Excess of these polyunsaturated fats, as well as a strong intake of one of the two types, can also be detrimental to the balance that must be obtained (Balic, A. et al, Int J Mol Sci. 2020 Jan 23; 21 (3): 741 ; Kendall, AC et al. Biochim Biophys Acta Biomembr. 2017 Sep; 1859 (9 Pt B): 1679-1689. extensive description in: https://lpi.oregonstate.edu/mic/health-disease/skin-health/essential-fatty-acids )

Are fats in balance? Lipidomics responds

The concept of CONTROL is obtained even more by balancing omega-3 fats with omega-6 fatty acid gamma linolenic acid GLA, coming from linoleic acid by enzymatic transformation, which, however, can also be slowed down for various reasons, such as the lack of enzymatic cofactors, stress and metabolic diseases (Figure 1). 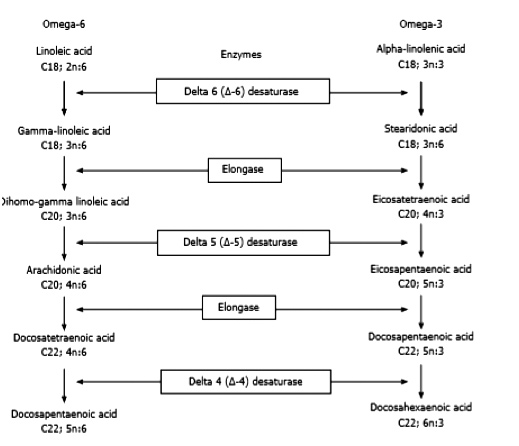 Borage oil (Borago officinalis) contains variable quotas of GLA and there are also 70% pure sources of this fatty acid. In addition to its direct effect in the constitution of the layers of the skin, GLA transforms into DGLA which, once entered in the membrane phospholipids, is in turn a precursor of anti-inflammatory prostaglandin of the series 1 (PGE1) and of 15-hydroxyheicosatrienoic acid which have an effect immediate on hydration and reduction of inflammatory intensity at dermatological level. (van Gool CJ, et al Am J Clin Nutr. 2003 Apr; 77 (4): 943-51; Brosche, T. et al. Arch. Geronol. Geriatr. 30, 139-150 (2000); Foster et al, Nutrition. 2010 Jul-Aug; 26 (7-8): 708-18)

On the basis of what is known about the effect of fatty acids for the well-being of the skin, the determination of the omega-6 and omega-3 state through FAT PROFILE ( lipidomic analysis of the membrane of the mature erythrocyte as a mirror of the systemic condition) should be indicated by dermatologists as the first basic molecular analysis to establish individual deficiencies and needs. 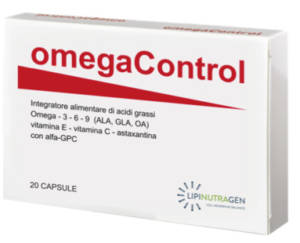 The possible lack of omega-3, -6 and -9 fatty acids can be integrated * with the help of nutraceuticals specifically designed to reach the cell membrane, the active site of fatty acids.

OmegaControl is a food supplement based on omega-3 fatty acids, from cold-pressed linseed oil with 70% alpha-linolenic acid (ALA), omega-6, from borage oil with 70% gamma-acid. linolenic (GLA) and omega-9 from extra virgin olive oil with a high content of oleic acid (OA).

A complete and balanced formulation which, thanks to the presence of particular ingredients such as Glycerylphosphorylcholine (alpha-GPC), Vitamins E and C and Astaxanthin, protects polyunsaturated fatty acids during absorption and distribution in the body.

Pack of 20 soft gel capsules; each capsule contains 455 mg of fat, of which 73 mg of saturated, 83 mg of monounsaturated and 299 mg of polyunsaturated. *For the intake it is recommended to hear the opinion of your Doctor and / or Pharmacist.

Article edited by the Lipinutragen Editorial Board:

The information provided must in no way replace the direct relationship between health professional and patient.