13 December 2019 by Lipinutragen in Molecular health and nutrition 463

The irritable colon (IBS acronym from Irritable Bowel Syndrome) concerns disorders characterized by alterations of the function of the digestive tract accompanied by pain, abdominal swelling and alteration of defecation. These disorders are extremely widespread, so much so that they concern between 10 and 20% of the population of Western countries, with a marked prevalence in women.

There are many mechanisms that can underlie this problem but there are some more than others that can be linked to nutrition. Let’s not forget that every day about 2 kg of food is ingested. Among these IBS trigger factors we highlight the following:

The role of nutrition… 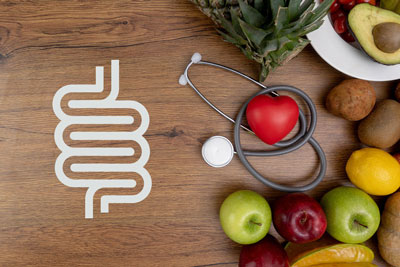 This reality is well known to nutrition professionals because IBS patients very often report suffering more intensely when eating certain types of foods. Food components that increase intestinal symptoms include insoluble fibers that are among the oligo-, di-, mono-saccharides and fermentable polyols called FODMAPs. The diet with low presence of FODMAPs is effective in reducing and treating IBS symptoms.

There are also subjects with IBS symptoms who, despite being negative for celiac disease, benefit from a gluten-free food. These patients fall into a problem called non-celiac gluten sensitivity (NCGS) and that is treated with a gluten-free diet.

Low-grade inflammation, both mucosal and systemic, is found in some patients with IBS. This condition is highlighted in the intestine by lymphocyte activation and immunity mediators, while in circulation by a greater presence of pro inflammatory cytokines. Speaking of inflammation, polyunsaturated fatty acids (PUFAs) enter into the scene, from which the molecules that induce or resolve inflammation start. Since the presence of omega-6 and omega-3 PUFAs in humans is ensured by dietary sources, the central role of diet in balancing the pro and anti-inflammatory processes is evident. Some authors, for example, have found a greater presence of arachidonic acid (omega-6, pro-inflammatory) and inflammatory cytokines in the plasma of a population of female patients with IBS (3).

From a recent study conducted by the American College of Gastroenterology, it emerges that patients suffering from IBS feel unsatisfied with the low level of effectiveness of the treatments received or frustrated by the side effects of the therapies. Waiting for the scientific world to find new treatments for these disorders, it makes sense setting up a nutritional approach that consider the critical points highlighted. The main elements to keep in mind in the dietary approach are:

In search of well-being, let's choose the supplement!