Our body interacts with the external environment through the epithelial organs which represent real defensive structures organized to protect the organism from external agents.
One of these is the intestinal tract which acts as a selectively permeable barrier, with a double function: (1) to protect against damage and infections and (2) to ensure the passage of nutrients, electrolytes and water, necessary for the sustenance of the organism.

Similarly, to a city fortified by a wall and protected by an army ready to take action in the event of an “enemy attack”, the intestinal barrier is structured in such a way as to neutralize a damaging agent, preventing its spread through the mucous membrane and the blood stream.
The intestinal wall is organized into different lines of defense, of a biochemical and cellular type, which act simultaneously and sequentially (see figure [1]) in order to prevent the adhesion and penetration of pathogenic bacteria, differentiating them from the commensals towards which the so-called immunological tolerance is maintained. 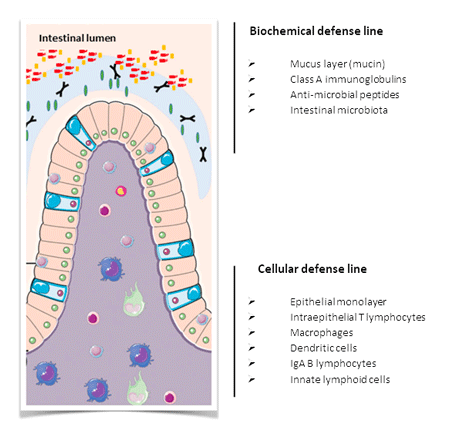 In the intestinal lumen, the epithelium is protected by a layer of mucin, a glycoprotein that acts as a physical barrier due to its viscous consistency, and by class A immunoglobulins (IgA), antibodies responsible for neutralizing foreign microbial antigens in the mucous membranes. The intestinal lumen also hosts commensal bacteria (microbiota) which compete with pathogens for space and energy resources and, in symbiosis with enterocytes, ensure the functioning and integrity of the barrier itself.
The cellular defense line consists of a layer of epithelial cells scatter with “sentinel” intraepithelial T lymphocytes.
In addition to the cell monolayer, there is an own foil densely populated by innate immunity cells (macrophages, dendritic cells and innate lymphoid cells) and acquired (IgA-secreting B lymphocytes).
Confirming the importance of this immune defense outpost is the fact that the lymphoid tissue associated with the intestinal mucosa (GALT gut associated lymphoid tissue) contains about 70% of the immune cells of the whole organism.

INFLAMMATION AS A MECHANISM OF RECOGNITION AND DEFENSE

The warning and intervention system to neutralize the pathogen is activated by inflammation which allows the deployment of mechanisms of recognition and defense mediated by epithelial and immune cells in a well-defined order and sequence. The ultimate goal is the elimination of the damaging agent and the restoration of the initial condition by tissue repair.
All this process is extremely expensive for the organism and that is why, with the evolution, the organization of the multiple lines of defense, biochemical and cellular, has been maintained: it may indeed seem unnecessary and excessive, but the prevention of infection is energetically much more favorable for the organism than the activation (and shutdown) of the inflammatory process in case of having to “declare war” on the intruder.
Furthermore, it must be considered that the inflammation itself, if not appropriately controlled by the process of resolution and repair of the barrier, can persist and become chronic, affecting:
• On the “tight junctions” between one enterocyte and the other which guarantee the physical integrity of the cell monolayer
• On the composition of the community of commensal bacteria whose biodiversity is necessary for maintaining the integrity of the intestinal barrier
• On the cells of the immune system that can remain in a state of continuous activation (chronic inflammation), perpetuating the cycle of tissue damage – inflammation – tissue damage. 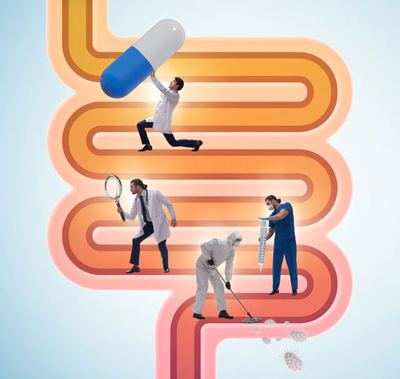 The impairment of the structural and functional integrity of the intestinal barrier favors the development of a varied spectrum of inflammatory bowel diseases (IBD – intestinal bowel diseases). Furthermore, the increase in permeability associated with a chronic inflammatory state is correlated with the appearance of numerous symptoms and pathologies such as:
• Recurrent genitourinary infections
• food intolerance
• Chronic fatigue
• multiple sclerosis
• Non-alcoholic fatty liver disease (NAFLD)
• Skin problems, such as acne, rashes or eczema
• Psoriasis
• articular pains
• celiac disease
• Asthma
• Obesity
In the last few years there has been an increase in the incidence of pathological conditions related to impaired intestinal function, suggesting an involvement of environmental factors.
What can we do to take care of our intestines?

Do not feed the inflammation!

Nutrition is certainly the first factor to consider ensuring a good functioning of the intestinal barrier. In the scientific literature there are many studies on animal and in vitro models aimed at evaluating the effects of macronutrients on the physical integrity of the enterocyte monolayer by maintaining and protecting cell-cell junctions. In some cases, such as that of the amino acid glutamine, several clinical studies have also evaluated the effects of its supplementation on intestinal permeability through the non-invasive test of the lactulose / mannitol ratio in the urine and the evaluation of intestinal activity. However, in general, favorable data from in vitro studies have not been translated to clinical application.

An important aspect that we can consider in defining our food choices is the health of the intestinal microbiota. Ensuring the diversity of populations of commensal bacteria and the supply of energy substrates suitable for their sustenance allows to have a positive effect on the functional integrity and solidity of the barrier architecture.

However, if we turn our attention to the well-being of the components of the cellular defense line of the intestinal barrier, through nutrition we can aim to guarantee an effective response of the immune cells in case of aggression by an external agent.
The immune response triggered by inflammation is a physiological process that must be commensurate with the body’s need for defense: once neutralized the damaging agent, in fact, it must deactivate to ensure the restoration of normal tissue functions.

THE CHOICE OF FATS FOR A BALANCED RESPONSE

The predisposition to the activation of an adequate inflammatory response and its balance with the resolution process (shutdown) can be guaranteed through the intake of omega-6 and omega-3 polyunsaturated fatty acids (PUFA) with the diet.
The PUFA fatty acids, in fact, inserted into cell membranes, are rapidly released into the intracellular environment when it is necessary to produce molecules that induce or resolve inflammation *.
The intake of essential fatty acids linoleic acid (omega-6) and alpha-linolenic acid (omega-3), semi-essential (EPA and DHA, omega-3) and the correct functioning of the endogenous enzymatic transformation pathways that concern them, allows to regulate the balance of the PUFA lipid precursors in the cell membrane and therefore the proinflammatory and resolving balance.
This will allow an adequate response of the organism, without being exaggerated by causing damage itself against the tissues it is supposed to protect.

they represent the most frequent imbalances of the membrane composition of the mature erythrocyte found in the Italian population [2]. These imbalances affect the predisposition of the immune system to activate and maintain a type of response, inflammatory or resolving the inflammation. From this point of view, many foods take on the connotation of functional food, if we consider that, in addition to their nutritional value, they can modulate a physiological function which, if unbalanced, induces and supports the maintenance of pathological conditions.

It is therefore extremely significant, in the case of intestinal problems, to assess the state of the balance of the omega-6 and omega-3 PUFA tracks in the membrane lipidoma of the mature erythrocyte. This allows to intervene, if necessary, through ad hoc supplementation studied on the unique profile of the person and the improvement of eating habits so that the change is integrated into the patient’s life and the benefits on the intestinal barrier persist over the years.

* To remind us of the central role of solver molecules there are their own names: the derivatives of omega-3 fatty acids have in fact been baptized with the names of protectins and solvins!
[1] Figure adapted from Thoo L et al. Cell Death and Disease (2019) 10: 849
[2] n = 5506, representative sample of the Italian population according to ISTAT, Lipinutragen database

Further reading on our LipiMagazine BLOG

“Intestinal well-being: microbiome and health”
“Nutrition is an important player in irritable bowel syndrome”
“Health starts from the grocery shopping”
“Autoimmunity and nutrition”
“Omega-3 allies of the immune system”

The information given must in no way replace the direct relationship between health professional and patient.